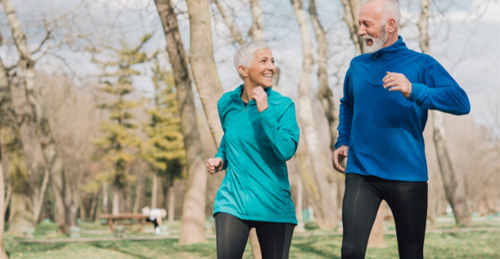 Elderly people who exercised more often exhibited signs for healthier nerve transmission, which may protect the brain from cognitive decline.

A recent research effort led by Kaitlin Casaletto (University of California; CA, USA) at the head of an international collaboration of North American and European Universities has discovered that higher amounts of physical activity in elderly people is associated with increased presynaptic protein levels in brain tissue. The same correlation was observed in people whose brains exhibited indicators of neurodegenerative disease, suggesting that physical activity may help to suppress age-related cognitive decline.

The levels of the presynaptic proteins synaptophysin, synaptotagmin-1, vesicle-associated membrane proteins, syntaxin, complexin-I, and complexin-II, in brain tissue were investigated. The samples from more active participants contained higher levels of these presynaptic proteins, which are crucial in the coordination of synaptic vesicles and the release of neurotransmitters in synapses. This relationship was comparable across multiple brain regions that are key for cognitive function including the hippocampus, which is responsible for processing memory.

Package not delivered: your leaky neurotransmitters and you

Neurotransmitters are not energy efficient, which could be explained by an energy leak from the vesicle membrane observed in a recent study.

The benefits of physical activity have previously been shown in mice, however, Casaletto commented that, “our work is the first that uses human data to show that synaptic protein regulation is related to physical activity and may drive the beneficial cognitive outcomes we see.”.

In a previous finding, William Honer (University of British Columbia; Vancouver, Canada), who is also the senior author of this current study, observed that people with high levels of presynaptic proteins in post-mortem samples better maintained their levels of cognition late in life. The underlying reasoning is that the high levels of the presynaptic proteins help maintain the synaptic integrity and functionality of neurons, and this preserved functionality can slow the cognitive decline that often occurs in aging brains.

Whilst the universal benefits of physical activity are well known, continuing to stay active in the later years of life may also keep synapses firing on all cylinders, dampening age-related cognitive decline exemplified by neurodegeneration in Alzheimer’s disease.

“In older adults with higher levels of the proteins associated with synaptic integrity, this cascade of neurotoxicity that leads to Alzheimer’s disease appears to be attenuated,” concludes Casaletto. “Maintaining the integrity of these connections between neurons may be vital to fending off dementia, since the synapse is really the site where cognition happens. Physical activity—a readily available tool—may help boost this synaptic functioning.”